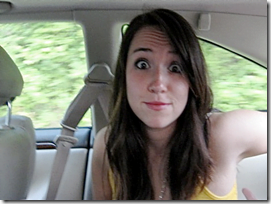 Marina Shifrin is our latest viral video star, she is the video editor that used to work for Taiwanese animator Next Media Animation and has made quite a splash for expressing her reasons to quit her job. She posted a film on YouTube of herself dancing around the open-plan workspace to Kanye West’***** single “Gone” with subtitles explaining her grievances in detail. Don’t you just love the first Amendment!

She describes herself as a Struggling comic/babysitter/novelist on twitter. Not satisfied with her video exposure, she also penned a 1,500-word blog outlining her reasons, which she called Journalism is Dead (To Me).

I’ve figured it out. For the past 6 years I’ve been a writer trapped in journalist’s body. I went to the big name journalism school and got the straight As. Upon graduation I said to myself, “Self, you need to get rid of your Freshman 15, you’re three years out of Freshman year and it is not becoming on you. Also, do you want to be a journalist or a writer?” 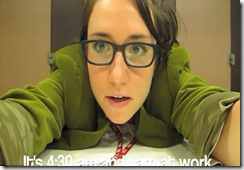 The highly creative girl attended Deerfield High School in Deerfield, Illinois and then graduated from the University of Missouri majoring in Journalism with an emphasis on Strategic Communications she also has a Minor in Business.

She moved to Taipei, Taiwan to work as a Comedy writer for Next Media Animation TV but we all know this didn’t work out. Some of her previous positions include Advertising Representative and Designer for Publications and Alumni Communication in 2010; after that she was also a Creative Advertising and Copywriting Consultant for LightsAmerica, last year she was in New York working as Head Writer and Content Manager at AD60 INC.

She also speaks Russian and Spanish, in the meanwhile she seems to be enjoying the success of her “quit video” she has even been parodied already!

What do you think smart decision? Or she just needed to vent? Anyways whatever makes her happy right! Good for you girl!