Marie Holmes is a North Carolina woman who became one of three $188 million winners of a $564 million jackpot earlier this year. Her name is making headlines once more because of how she’s choosing to spend her money!

Reports indicate the 26-year-old winner used a chuck of her money to bail her convict fiancé not once but twice! According to WWAY she paid $3 million in March just weeks after she won the lottery, most recently prosecutors say is likely she paid another $6 million to bail him a second time.

According to the NY Daily News, Lamar McDow, was released from a Brunswick County jail last week on $6 million bail. McDow –who’s nicknamed “Hot Sauce” was accused of trafficking and intending to sell ******.

At a Powerball  press conference where she received a giant check, Holmes said she would use the money to finish college and set up tuition funds for her four children, ages 9 months to 7 years. The single mom was born Fontella Marie Holmes.

Marie who in the past worked at Walmart and McDonalds, also revealed she had to quit her jobs because she needed to care for her children full time. She added one of her four children suffers from cerebral palsy. 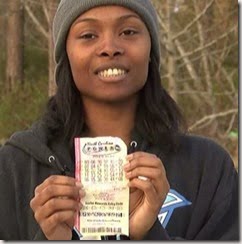 When she hit the lotto back in February, Holmes told “Good Morning America” she ran outside screaming “We made it!.” She took home $88 million after taxes. At the time she had been living with at least 6 –other people. The winning ticket of Holmes was actually purchased by her mother, who got it on her way from church, so when she realized she had the winning ticket, her mother was the first person whom she called.

At the time the mom of four, also said she would donate money to church and to organizations associated with cerebral palsy, in honor of her son.

Do you think she made the right move by bailing her man out of jail?