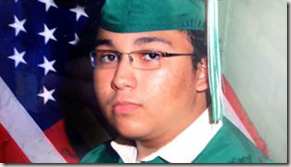 Can you imagine someone in their right minds wanting to join al-Qaeda? Well, meet 25-year-old Marcos Alonso Zea, known in some circles as “Ali Zea.”
Marcos who is from Brentwood tried to travel to Yemen last year; that when he came on the radar of the FBI and NYPD for allegedly wanting to join a branch of al-Qaida along with 18-year-old Justin Kaliebe. He provided encouragement and money to the teen for the same purpose, according to prosecutors.

He was arrested Friday morning at his home and pleaded not guilty at his arraignment in Central Islip federal court.

He graduated from Brentwood High School, and studied at Dowling College and Suffolk Community College where he studied Arabic for about two months.

The son of Alvaro and Sandra Zea left his parents in shock, with the mother saying

You might notice his name resembles a Latin origin, he was born in the U.S but his parents are of Colombian and Guatemalan origins. At some point Zea converted to Islam and became radicalized around 2009.

He attended the mosque sporadically to pray, and went by the name “Ali.” He was one of the few Latinos to attend the mosque according to Muhammad A. Jabbar.

According to his mother he is interested in languages and other cultures and was studying to be a teacher.

NYPD commissioner describes the buddies as

“Aspirants with lethal intent who seek terror training abroad are of paramount concern,”

Zea was the leader of the two, attempting to fly from New York to London, with the ultimate destination of Yemen, officials told NBC. But agents in London turned him back and sent him to the United States.

It was upon his return when he inspired Kaliebe a student at Babylon High School, who pleaded guilty in February to attempting to provide material support to terrorists.

Zea faces a maximum of life in prison. Don’t miss the moment of his arrest on the video below!