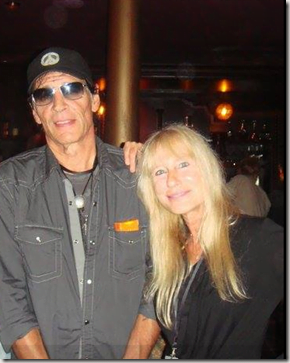 Meet Liz Asheton, the wife of founding member and drummer for proto-punk band Iggy and the Stooges, Scott Asheton.

Liz who’s husband passed over the weekend has saddened the world of rock-punk music.

Liz’s late husband was born on 16 August 1949, in Washington, DC. He played drums for other bands, including Sonic’s Rendezvous Band, the group led by former MC5 guitarist Fred “Sonic” Smith.

Her drummer musician hubby, was originally from Ann Arbor in Michigan, he temporarily left the band in 2011 following an unspecified injury, but played with the band on their 2013 LP Ready to Die.

The couple have one daughter, Liz who is in her early 60’s is the mother of Leanna Raquel Asheton, who according to her Facebook she currently resides in Los Angeles.

The cause of Scott’s death was not immediately confirmed but his daughter confirmed the sad news on Monday, that her father died on Saturday of a heart attack. She said her father

“was as cool as they came. His wisdom guides us on.” Bandleader Iggy Pop posted on his Facebook page Sunday that he’s “never heard anyone play the drums with more meaning than Scott Asheton”.
Asheton was part of the Stooges when they formed in 1967 in Ann Arbor, Mich. His older brother, Ron Asheton, who was the group’s guitarist, died in 2009. The Stooges released their self-titled debut in 1969.

While the Stooges weren’t a commercial success, they went on to become one of the significant bands in punk music. Their raw sound helped inspire the first generation of punk musicians.

“It warms my heart to read how much he has inspired and the love and respect so many have for him and his music,”

Leanna Asheton said in an e-mail to The Associated Press late on Monday. Liz and Scott along with their daughter enjoyed going to gigs together in recent years, including Black Rebel Motorcycle Club in Detroit, which she said was his favorite and last show. In the picture above we can see the three of them arriving at Red Horse Ranch.

Along with his wife and daughter, Ashton is survived by sister Kathy and his stepsons Simon and Aaron Wallis.

Our prayers go out to his lovely wife, daughter and rest of the family and millions of fans around the world.