Lina Dovolani is the wife of 42-year-old Driton “Tony” Dovolani –better known as your favorite Albanian pro ballroom dancer. The season dancer, has been paired up with TV star Kim Zolsiak and will make their debut appearance this upcoming September 14th in the 21st season of DWTS!

According to the Daily Mail, Tony and the 37-year-old blonde have been working hard during rehearsals. The other blonde in Tony’s life is his wife of 16-years, Lina Dovolani; want to know more about her? Sure you do!

Let us start by saying there wouldn’t be a Tony Dovolani in DWTS if it wasn’t for his hot wife. Speaking to People about her, the 42-year-old revealed earlier this year: “My wife is my rock, she is the most amazing person I have ever met in my life.”

That makes it much more exciting to get to know her right! Well what does Lina Dovolani do that has her husband gushing about her? He continued:

Now that’s a man in loved wouldn’t you say! 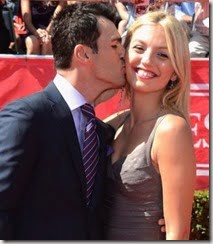 Tony moved to the U.S. in the late 80’s. The Kosovo native had been dancing since age three. He took lessons at a Fred Astaire Dance studio and was known locally as the playboy type, but all that changed when he met Lina Dovolani.

Lina –also an Albanian native was born Trendelina Jani–met Tony in 1998 during a blind date arranged by his older sister Laura, he revealed he was hooked just hours later after meeting and proposed to her. They made it official in November 1999. In a span of 16 years of happy marriage,  they have welcomed three children: daughter Luana, born in 2005 and the twins Adrian and daughter Ariana –born in 2008.

Judging by her social media photos, the hot mom of three, keeps a close relationship with her sisters.

Lina must be super proud of her hubby, Tony is the longest-running dance pro on Dancing with the Stars. Excited to see him next week?