According to the Daily Mail, nick decided to give the show a chance after being asked 5-times. He told US Weekly he hopes it’ll be a fun experience, funny enough he admits even though he has danced with his BSB bandmates since forever, he admits he’s a little insecure about his dancing anilities. Think he’ll do better than little brother Nick Carter –who was in season nine and finished in fifth place with his partner Karina Smirnoff?
As you place your bets, might as well read more about his lovely actress wife. 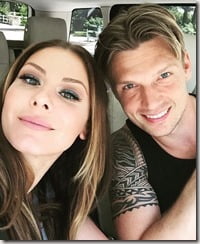 In an interview Nick Cater, admitted that marrying his wife, Lauren Kitt, has probably kept him from suicide as well as alcoholism. He told Life & Style last year:

“After everything I went through I could have died. And I came close.

“Drinking is a battle to me, even to this day.

“What Lauren has done is give me someone to be accountable to…Lauren has given me someone I want to be here and live for.

“It’s hard not to look at each other and laugh at each other…I think her face and idiosyncrasies keep me going.”

30-year-old Lauren tied the knot to Nick last year, after dating for several years. Lauren and Nick’s journey to the altar was documented in the 2014 reality VH1 series “I Heart Nick Carter.” The show followed the newly engaged couple’s journey to the alter and gave viewers an inside look at how Nick and Lauren learn to balance demanding careers, outrageous families and planning a wedding. They shared their big day on national TV.

Lauren was born June 3, 1983. She is also known as a fitness expert whose video series “Kitt Fit” — which provides workout tips for the health-conscious, that would explain her shaped curves! According to IMDB, Kitt also played a boot camp instructor on an episode of One Life to Live in 2013.

She is currently filming Dead7, a horror movie written by hubby Nick.