19-year-old Lacie LaRose was gunned down last month, the young woman –who was a college student –lost her life after she was shot while being at a party with friends.

It has been revealed a verbal and then physical altercation developed between –in a home in College Station –the people at the gathering and a neighbor, it’s possible there’s more people involved police said.

Recent reports indicate, according to new witnesses testimony, the argument began over beer pong rules; the argument turned into a heated fight ending up with a man –identified as a neighbor of the party host –shooting the pretty blonde in the neck and injuring two more people. 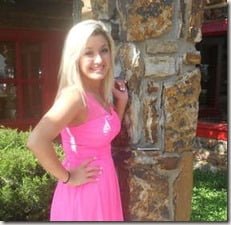 The party group had gathered to watch the fight between Floyd Mayweather fight Manny Pacquiao.

39-year-old Ronald Wayne McNeil, of College Station, has been charged with her murder.

Apparently, McNeil had a discussion with other partygoers about the rules of beer pong. The witness told The Eagle that McNeil and a group of his friends got evicted from the party, but pledged to return armed.

He kept his word, and returned shooting at least 14 times, allegedly to scare the people he had argued with.

Lacie Christabelle –the daughter of April and Robert LaRose –graduated from Nimitz High School in Irving, and her mom said she picked Blinn College so she could transfer to Texas A&M and become a veterinarian. Her mom also revealed Lacie was an only child but was loved by her many friends.

Lacie’s last tweet was on April 23rd while on Facebook she had listed Promotions and Animal Clinic Of Grand Prairie as her working place. Lacie was in a relationship with Dustin Davidson.

The affection people felt by Lacie has been displayed in many ways. May people attended her funeral and several fundraisers have been set up in her name. One of her friends, Jacee Wren has even sold over 700 bracelets with the slogan “Love ’em like Lacie” and will donate the money to the Dallas Zoo’s wolf habitat.