Lace Morris is one of the girls competing in the 20th season of The Bachelor. One episode down, many more drama to come.

The Denver native sure got our attention during the season’s premiere. Lace Morris became Ben’s first kiss of the night.

According to People, Lace Morris  will surely be a future cast member on the 2016 season of Bachelor in Paradise, but we let’s not get excited, we are only in episode one!

The 25-year-old is a real estate broker so she knows how to make business. The stunning brunette is a former realtor at Keller Williams Realty, Inc. According to her LinkedIn, she is a 2008 graduate from Arvada West High School. Lace Morris studied Hospitality, Sports Communication at the Metropolitan State College of Denver.

In 2014 she got her P&C license/Real Estate, Real Estate and Property & Casualty from Kaplan Professional Schools. 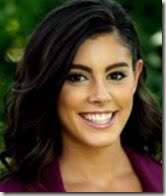 Lace Morris could be described as a little intense. After all, immediately after the ceremony concluded and getting a rose; she confronted Ben about not making eye contact with her. To everyone’s shock, she made it through round one. Ben explained in an interview with Entertainment weekly, he appreciates her honesty and added that, that can play to his advantage to “know where everybody’s is at.”

According to her ABC profile, Lace is 25 years old and currently resides in Denver, Colorado. Pretty convenient for Ben, who also lives in Denver.

Her favorite music is Rap, R&B and Country. An interesting fact, among her three-all-time favorite movies is listed, How to Lose a Guy in 10 Days –could she be acting like “Andy” the films main character?

When asked for her type, she described her dream guy as being tall, dark, handsome, pretty eyes, masculine features, a little beard and fit. Also, she wouldn’t want to be anyone else but herself, only richer and her worst date memory is leaving on the spot because the guy was too into himself.

Lace Morris keeps active on social media, she often posts to both Twitter and her Instagram account. Just a few days ago she posted a photo of herself holding a Patron bottle and writing:

“& The rose went to this bottle of Patron, I’m just glad I was there to accept it on its behalf…At least IT had the decency to look me in the eyes. ”

Does she have any chances with Ben? Comment below!