Kyle Jason is one of the contestants in season 32 of Survivor Kaoh Rong. The 31-year-old bearded fella is a bounty hunter and PI from Michigan, but he also adds on his Twitter bio, ‘A bad mother f***r and one **** b**h. Whoa, we are liking this guy already, he seems as real as you can get with a touch of confidence. Keep reading more about Jason below.

The Brawn tribe member, was in the Army and became an NCO in a period of three years. Kyle Jason is sure his own hero. When asked about his inspiration in life he said: ‘I am just me, and everything I have ever wanted, I go for. I won’t stop until I get it and I don’t care what I have to do to get it’

Jason who enjoys kicking in doors, getting tattoos and riding his motorcycle, also said he is repelled by dumb people, lazy people and one uppers.

The Loud, blunt and hilarious, Kyle would take to the island hair ties, energy drinks and a mini DVD player, if he could. Jason revelaed on his CBS bio, he is in it, for the money and thikns he will be the sole survivor because he’s spent years living in third world countries and war zones- “I know how to survive. I can make fire, build shelter, last as long as needed, go days without food and I work extremely hard.” 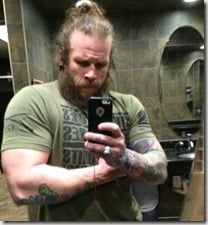 Underneath all that ‘wrestler’ look he has going on, there is one softer side to Kyle Jason. He happens to be a married fella and the father of two adorable little girls. His youngest daughter was diagnosed with autism and is always in some form of therapy. 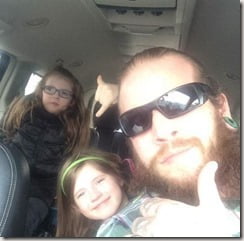 Kyle Jason gets in touch with his fatherly side when he says, he worries about his little girl and that it would be nice to have some money in the bank, and be able to care for his little one.

Kyle who resides in Roseville, Michigan owns his own company US Apprehension, where he is president and CEO. He also works as a Private Investigator for Phase 4 Investigations.

Do you think he has a shot?