This is the flash time everyone has been waiting for. On this 16th season with DWTS will go live this month, anticipating to the new cast. Kyle Jacob’s wife, Kellie Pickler is one of them. 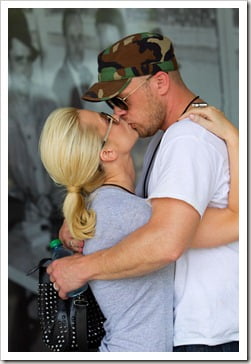 Lisa Vanderpump, Wynona Judd and Kellie Pickler are some of the names that you will be seeing on air. The star of Real Housewives of Beverly Hills, 52, will compete against Gleb Savchenko.

He’s going to have to carry me around the dance floor.

I’m going to give it my best shot, but I need a good teacher. He’s easy on the eyes, so it’s going to be a little easier.

The country music legend Judd, 48, in the meantime, will dance with Tony Dovolani.

I picked him before we even met.

I said, I just have a feeling. I said I will do Dancing With the Stars if I can dance with Tony, and so I got my wish.

Pickler, 26, who is growing her hair after shaving her head to prop up a pal stricken with breast cancer, rocks a strapless aqua gown with crystal embellishments for this big night. She will dance with Derek Hough.

We want people to underestimate us, so that way they’re not riding on our coattails.

I’ve never ballroom danced before. . . We’re very serious about this competition, because we’re going to take that shiny ball back to Nashville, Tennessee.

Kyle was born in 1973. He is an American country musician and also a staff writer.

On June 23, 2010, the country music star Kellie Pickler announced her engagement to him on June 15, 2010, the day of her late grandmother’s B-day, while on a beach at sunset after 2½ years of dating. Pickler and Jacobs were married on January 1, 2011.