Let’s meet Kyle Dubensky, who is suing Ms. Adriana Ferrer for false accusations!  Adriana who is the former girlfriend of the 82 year old billionare George Soros is facing a $5million lawsuit! 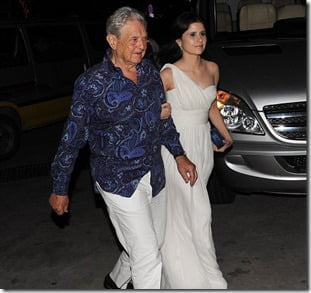 Isn’t this Brazilian-American gorgeous 31 year old actress tired of all the legal encounters!! On August 10, 2011, Ferreyr filed a law suit against Soros in New York for fraud, harassment, emotional distress, estoppel and assault and battery! The whole thing started over a ‘broken promise’ that she was to be handed a dream apartment!

The 81-year-old financier, known as the Man Who Broke the Bank of England after making millions during the 1992 UK  currency crises, was sued for £31million by 31-year-old Brazilian Adriana Ferreyr. At the time

Miss Ferreyr, insisted that after five years of being with Mr Soros he broke things off days before she could move into the dream flat, she managed to rent another apartment there.

According to a lawsuit filed in Manhattan Supreme Court, there was a brief reconciliation between the pair in August in which the couple spent a night together at Mr Soros’s home in New York’s Upper East Side.

It was there that Mr Soros allegedly made one of his rare misjudgments to say the least! Miss Ferreyr claimed that while they were in bed Mr Soros, who has an estimated £8.9billion fortune, ‘bluntly’ told her that a £1.2million apartment he had promised her in New York had been given to another woman apparently his new girlfriend!

Everything ended with the police at their room. This is a “he said, she said” kind of matter…but know seems is time for Adriana to get a taste on how it feels to be on the accused stand!

Kyle Dubensky Woods says he and Ferreyr had consensual *** in her Harlem apartment. But he alleges that when he tried to leave, she blocked his exit and dug her nails into his arm!! She tried to make things look her way saying it was Woods ho had attacked her once they were found wrestling in the elevator as the aspiring actor was attempting to leave.

And although Dubensky was held for 18 hours the District Attorney’s Office did not press charges and it was actually Ferreyr who asked for him to be released! Is this maybe just like a “drama 101” What do you think is really going on here???

So we know Soros is a mogul, Adriana an actress but who really is this new guy in the picture??

Kyle Dubensky Woods grew up in Milford, Pennsylvania, after school and sport in New Jersey he moved to Baltimore to attend College. What are the odds get this; he enlisted as an engineer but got caught by an acting class and his life shifted forever. It was then when he moved to the Big Apple to follow his dream.

We can see in his Linkedin profile he is 28 year old student at Colombia University, he currently lives in NY city and in the past he worked as an actor at National Michael Chekhov Association, waiter at Creative Edge Parties, Chartering Assistant at Sims Metal Management Limited, Floral Designer at Flower Mid 36, Soccer Coach at Eastern Athletics and Waiter at Smith and Wolensky’s.

Some of his interest: of course acting, writing, scripts, soccer, fitness, film, theater.

You can read more about him on his website here. Don’t miss hot pictures from Kyle, definitely an improvement for Adriana! Who can really blame her for not wanting to let the guy go!