Kristen Denny is the happy girlfriend of The Voice contestant, Jordan Smith. Her 22-year-old boyfriend was crowned the winner of the show’s Season 9 last night!

According to US Weekly, Jordan’s favorite moment from this season was performing Queen’s “Somebody to Love.” But he actually had many memorable moments. According to Billboard, his performance of “Chandelier” in the Blind Auditions remains one of the highlights of the season.

Smith was described by his mentor Adam Levine as “the most important person that’s been on this show.” He’s proved on the show that he can hit both the high notes and the top of iTunes. His version of Beyonce’s ‘Halo‘ reached #1 on the US iTunes chart, dethroning Adele.

After becoming season nine’s champion, he fittingly sang “Climb Every Mountain,” which perfectly encapsulated his journey this season. This is Levine’s third season as the winning coach.

When he is not singing, Smith is a teacher’s assistant at Lee University. And much of his time, he spends with girlfriend, Kristen Denny –who is nearly a decade older.

Kristen Denny currently resides in Pineville, Kentucky. She was born Kristen Fae Denny. She is a Speech Language Pathologist at Bell County Board of Education. 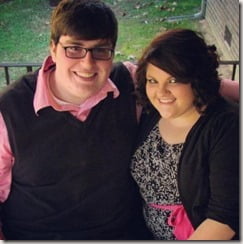 Kristen keeps active on social media. She has been Jordan’s number one supporter, posting images of the couple and little messages of encouragement.

Under the about section, on her Facebook page, Kristen Denny says about herself:

The most important thing in my life is God. He is so good to me and I don’t deserve it! He has blessed me with an amazing family and the best group of friends anyone could ask for!

She also reveals music is a very important thing in her life. The 31-year-old –just like her man –loves to sing. Kristen Denny plays the piano and guitar. Kristen loves singing in church enjoys spending time with friends and family.

Kristen is also a huge fan of the boy band N’Sync. Kristen and Jordan have been dating for over three years.