Earlier this month, we learned former Real Housewives of Atlanta, Kim Zolciak is scheduled to appear in the 21 season of DWTS! The 37-year-old blonde will be showcasing her best moves with the help of Tony Dovolani!

Are you excited to see her on the show’s premiere this upcoming September 14th?! Until then, we leave you with some interesting info about the reality Tv star and country music singer, Kim Zolciak.

She was born Kimberleigh Marie Zolciak on May 19, 1978, she rose to fame in 2008 thanks to the famed Bravo TV show. Since then she’s become a major TV personality whose bubbly and controversial self landed her, her own TV show. Being part of the Real Housewives of Atlanta helped the blonde launch her singing projects. She is a self described, tv personality, singer & performer, and most importantly mother & wife.

Following her stint in the Real Housewives of Atlanta” after 5 seasons, she was given her own Bravo spin-off, “Don’t Be Tardy for the Wedding” showcasing her family life and upcoming wedding to Kroy Biermann, in 2012.

Kim Zolciak was first married to Dan Toce for a short period, from 2001 to 2003. In 2011 it was revealed to the TV star’s regret, her ex-husband was a convicted child molester.

Daniel Dominic Toce spent time behind bars in a Connecticut state prison after pleading guilty to molesting a 15-year-old girl. He was allegedly arrested in 2010 for sexual risk of injury to a minor.

In addition to his child abuse conviction, he already had a list of convictions and arrests for offences dating back from 2004 including breach of the piece, felony robbery and larceny.

Following his divorce form Kim, he tied the knot to a another woman named, Mary. She said about him:

‘I want Daniel to rot in jail for what he did.’

Kim who was devastated after hearing what Toce had done, said she never received any child or spousal support from him and that she would make sure to cut all ties between him and their daughters.

Kim is now married to Kroy Biermann –the NFL Falcon’s player. What can we tell you about him that you don’t already know!

Kroy was drafted by the Falcons in the fifth round of the 2008 NFL Draft. He is a graduate from the University of Montana.

Kim and Kroy tied the knot on November 2011 at their Roswell, Georgia home. She is 7-years-his-senior.

Kim and her younger hubby have four children together. In 2011 Kim gave birth to their first son Kroy Jagger, followed by son Kash Kade and twins Kaia Rose and Kane Ren, who were born in November 2014. Kroy became the legal father of Brielle and Ariana in 2013. 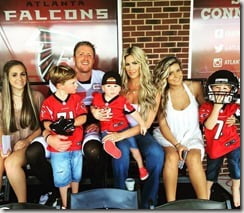 Brielle Biermann is the oldest of six children, her father is Dan Toce. She was born February 25, 1997. Thanks to her mother’s exposure, Brielle is a well known reality Tv figure. She appeared in The Real Housewives of Atlanta until her mother left the show and later appeared in Don’t Be Tardy.

The pretty blonde is making her way into a modeling career and from the shows she’s stated her interest in a career in entertainment. She modeled during the 2013 New York Fashion Week at the Michael Kuluva show.

Most recently she has been linked to Scott Simmons. Brielle –who graduated high school last May –is good friends with other reality stars including Khloe Kardashian.

Ariana Biermann, is Kim’s second child, she is also daughter of Dan Toce. She was born October 17, 2001, she will turn 14 next month! Find her on Instagram here.