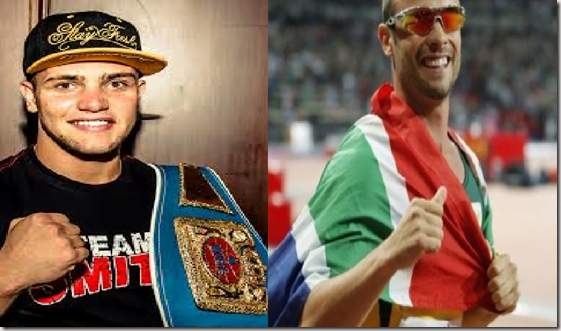 Kevin who is from Johannesburg, Gauteng is a rugby player and currently pro boxer, ranked in the heavyweight & cruiserweight divisions.

Kevin dreamed of ring warfare since he was a teenager, when he first started training in a boxing gym. After scoring an amateur record of seven wins and one loss; Lerena then switched his main focus to rugby, playing in King Edward VII high school’s first team at inside centre and winning a contract with the Golden Lions. He also scored three distinctions in matric in 2010.

But earning no more than R5000 a month on a junior contract to play in the Vodacom Cup was not enough for this budding entrepreneur, who complemented his income as a bouncer.

Lerena took the experience he gained at clubs and formed a security company that recently won the tender to work the Justin Bieber concert in Cape Town later this year.

In 2011 he turned his back on rugby to become a professional boxer, and has since built up a record of six fights, all won by knockout. Few musclemen in boxing have risen to the top but Lerena, who fights at 90kg, doesn’t view himself as a body-builder type. Lerena who had previously met blade-runner, Oscar Pistorious was called to the murder-trial to testify on one of three separate firearms charges which Pistorius is facing in his trial.

And in fact that’s what he did. During Oscar’s day three in trial, Lerena set the record straight about being shot on the leg by his friend. Mr Lerena said he met Pistorius at a track day with the luxury lifestyle group ‘The Daytona Group.’

“We socialised afterwards. He’s an icon and a legend in sport,” he said. “To get help from a guy like him was very important. He was going to help me with diet, and a little bit of running.”

About the leg incident he said, he had joined Oscar, British Olympic sprinter Martyn Rooney, and another friend Darren Fresco at a restaurant, where a gun owned by Fresco but fired by Pistorious into the floor left the young boxer in shock. Although he wasn’t injured Lerena said he was in shock and this is what happened afterwards

Did Kevin just said Pistorious is a liar??