Kenneth Jones is the father of 18-year-old Steven Jones, who’s been identified as the NAU shooter. According to reports, Steven Jones opened fire at a parking lot outside Mountain View Hall at 1:20 am PT, on the Flagstaff, Arizona campus, killing one and injuring other three.

According to the official statement from the Flagstaff police chief, two groups of students got into a confrontation and although it hasn’t confirmed yet it appears the situation escalated and got out of hand rather than a premeditated attack.

Pictures that fit the description of Kenneth Jones’ son Steven Jones have been circulating. According to his Instagram photos Steven is not shy when it comes to guns, he’s posted numerous pictures posing with weapons.

One of his latest tweets from September reads

From his Instagram photos we can also tell, Steven used to be a chubby kid, he posted the photo below with the caption: #TransformationTuesday‘Cause we all had that awkward stage 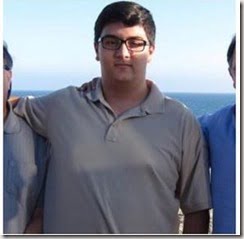 According to COED.com a father claimed his daughter was studying with Steven in the library before the shooting.

Martin Jones, a member of his family wrote on  his Facebook page about the situation, posting: 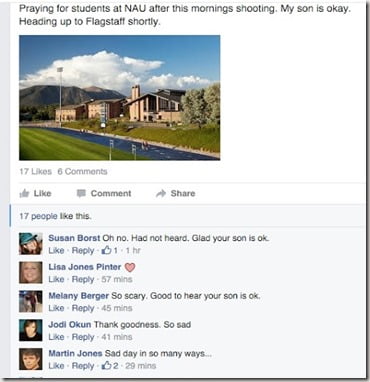 Steven Jones’ father Kenneth Jones, who appears next to him on Instagram, father and son appeared to be enjoying their like for guns. Kenneth Jones is security officer.

60-year-old Kenneth L. Jones originally from  New Jersey attended Long Branch High school and received his degree in psychology from Saint Leo University in 1985. He worked with the Pennsylvania Capitol Police and Wackenhut Security and is currently armed security officer at United American Security LLC. Kenneth Jones is married to Lisa Jones, but it is uncertain if she is Steven’s mom or stepmother.

Their son victims have been named as Nicholas Prato, Kyle Zientek, Nicholas Piring, and Colin Brough as the fatal victim.