Kelsey Weier is a stunning reality TV contestant whom you may recognize from the newest season on The Bachelor starring Peter Weber.

The blonde babe, hails from Des Moines, Iowa -and has been revealed as one of the lucky ladies who will make it far this season.
You may already love to hate Weier who quickly became a lead in the show when in episode two she snapped at another contestant for allegedly stealing her set up which included Champagne all the way from Des Moines. Kelsey who gets super upset, tragically ends with bubbles up her nostrils, the whole thing is hilarious. The episode is now known as ‘Champagnegate’

Kelsey who was born and raised in Iowa, has a fraternal twin sister and younger sister. According to her own account while on the show -Kelsey’s father abandoned her mother and left to Mexico, where he started a new life. She hasn’t seen him since.

Weier’s looks certinaly make her stand out, the stunner is actually a beaty pageant queen. She happens to be the former Miss Iowa. The bachelorette competed at the Miss USA pageant after being crowned Miss Iowa USA in 2017. 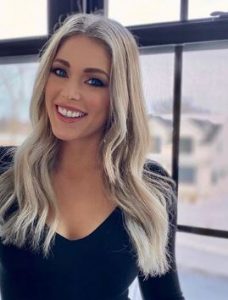 28-year-old Kelsey Anne Weier isn’t only a pretty face, she currently works as a professional clothier for Tom James. The Pilates lover works at the world’s largest manufacturer and retailer of custom clothing, according to her LinkedIn. She’s held down the job since 2017 and apparently provides fine clothing and individualized wardrobe service to clients.

In addition, Kelsey who is a woman of many talents attended cosmetology school and worked as a hairstylist. According to her Miss USA bio: “In 2013, Kelsey graduated early from The Salon Professional Academy in Iowa City, Iowa. For the past four years, she has been a full-time professional color and extensions specialist at Rick Mosley Hair.”
On her resume you can also find nanny, as a previous job -one of which she actually very proud of since she listed her boss, Sonja Heying -as the person she admires the most.