Portwood shocked her family and audiences when she first began dating the DJ in 2014. Things became even more worrisome for her cousin Krystal, after she found out Amber and Baier were engaged in early 2015. Last week things took an even shocking turn when Amber’s baby daddy, Gary Shirley, announced publicly Matt had at least seven kids with five women.

Kelli Maguire Nunn has stepped forward amid allegations that Matt is the father of several children with different women.

44-year-old Matt Baier hails from Boston. On his Twitter account he says, worlds biggest Ramones fan and animal lover. He used to be an aspiring professional poker player and DJ. He met amber after he approached her on Twitter in the summer of 2014.

Amber told about her engagement to Matt:

“We’re expecting between a year or so, we want to get married,” “Right now, we’re living together, we’re trying everything out, we’re seeing how we are. We learn something about each other every day, and we want to make sure everything is smooth before we really jump the gun and actually make it official.”

The pair have kept their relationship very private and not much more is known about their romance off camera. 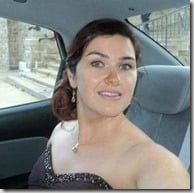 According to her social media info, Kelli Maguire Nunn is an Assistant Manager E-Commerce at Roche Bros. Supermarkets. She previously worked as a Front Office Manager at Island Hospitality Management and Island Hospitality Palm Beach Florida as a Cash Reporting Specialist.

Kelli Maguire Nunn is currently married to Manuel Nunn. The couple became engaged in 2013. She is the mother of four children, including Eleanor and Alexander Nunn. She revealed she is the mother of an 8-year-old daughter with Matt Baier.

The Boston native, Kelli, also claims Baier abandoned his daughter before her birth, and owes more than $10,000 in child support.

Kelli Maguire Nunn met Baier in 2007, when she says they worked together at a Frito-Lay warehouse outside Boston. She quickly became pregnant but the news of a baby didn’t sit well with Brier who took off. Accoridng to Kelli Nunn, Matt met their daughter when she was 1-month-old and introduced himself as her sperm-donor. An angry Kelli kicked him out.

If you think that was bad, Kelli Nunn tells Radar, two years later Matt called asking for forgiveness. During their short reconciliation, Matt told her he didn’t feel a connection with their little girl. That was the last time Kelli saw him.

Kelli Maguire Nunn said she was shocked when she saw Matt on TV and also added her engagement speech to Amber was almost identical to hers. Kelli warns Amber, she will be hurt by Matt.

Any thoughts? What would you do in Amber’s shoes?

You can find Kellin Maguire Nunn on Twitter here.