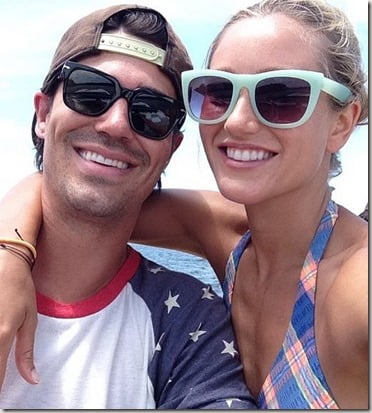 Waiting for Amazing Race Season 25 to premiering Sept. 26 on CBS?! Us too! 30-year-old Singer/Songwriter Whitney Duncan and her man Keith Tollefson have been confirmed to appear on the show!

It makes sense the couple are racing as a team in the upcoming season 25 of Amazing Race, since sparkles flew between then in another TV reality. Keith and Duncan met three years ago while on hit TV series Survivor. At the time, 27-year-old Whitney was secretly married but that didn’t stop her from falling for Tollefson, on Survivor: South Pacific in the summer of 2011. Last year, the former tribemates announced they were engaged, Keith popped the question on Valentine’s Day 2013 and the couple have been married for a couple of months already! The “Skinny Dippin’ ” singer portrayed herself as single on the 23rd season of the CBS reality show, but she had actually been married to Donny Fallgatter, lead singer for the band King Billy, since August 2010. The country couple’s divorce proceedings were complete in November 2011. Hunky Tollefson is described as a self environmentalist but we first met him as a Edina, Minn. Resident and Water Treatment Tech. After graduating from college he moved to Hawaii where he lived for two years. He shares his biggest inspiration is his mom –any guy who says that gains major point with chicks –saying: “She raised me and my sister with little help and eventually bought a house for us after saving for years. She taught me how to be a gentleman even while I was causing trouble when I was young. She instilled great morals, values and love for all those around me.”

The fun, adventurous, and driven dude signed up for Survivor because he wanted to challenge himself, learn what limits he could reach and break them.

Keith is also a certified EMT which gives him a pretty nice advantage to him and his new lovely wife. He enjoys Surfing, swimming, and long-boarding so Amazing Race will be a great time for him and Whitney!