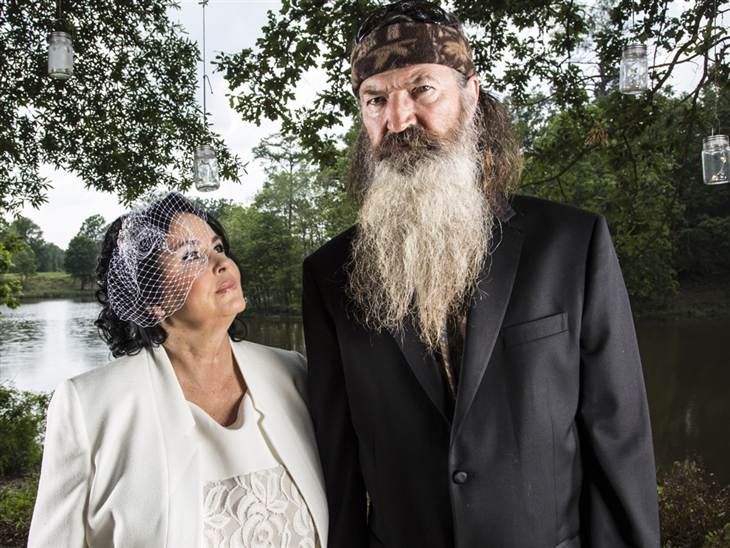 Phil Robertson and Marsha Kay Carroway started dating in 1964, when she was only 14. Two years later they married. Their first son Alan was born while they were still attending college.

On the show, Duck Dynasty, Kay is referred to as Miss Kay. Besides Alan, they have three other sons: Jase, Willie and Jep. Kay loves to cook and always has her entire family over for a home cooked meal after a hard days work.

After receiving his bachelor’s degree in Physical Education and a master’s in Education, Phil spent several years teaching. But although his students like him, he preferred to be in the woods hunting.

In the very early 1970s, he began running a bar which led to alcohol problems. At times he would even kick his wife and kids out of the house. He committed crimes and would hide in the woods to avoid authorities. During this time Kay would tell their kids that Satan was in their dad, and not to hate him. The only thing that kept Kay in the marriage was the quote, “One man, one wife, for one life”.

Then his sister brought a man to talk to Phil. They discussed Robertson’s life, and after he learned of the forgiveness offered by Jesus and the promise of Heaven, Robertson repented of his sins and was baptized in the presence of his wife and children. He was 28 at the time.

Barbara Walter’s yearly show, The Most Fascinating People of the Year, was looking to interview Phil and Kay Robertson, but in a sneak preview of the transcript of the show set to air Wednesday, Barbara Walters asks Phil Robertson’s wife, Miss Kay, if her husband would rather go hunting than sit down for the ABC network interview.

Miss Kay Robertson responded jokingly: “Oh yes. Between, uh, November and January, I told him I didn’t ever plan to die then, because, he may not be at my funeral.” Lucky for Phil, Miss Kay is one patient woman!