Kailin Holland is the 17-year-old teen from Louisiana who was arrested after allegedly dragging a McDonald’s worker out of a service window last week.

Footage of the terrifying moment shows a female McDonald’s worker being dragged out of a drive-thru window! The victim can be seen in the video –taken with a mobile phone from inside the car –arguing with a customer when seconds later she’s being pulled out by her hair and yanked through the window service.

Kailin Holland and her friends allegedly stopped at the fast food drive-thru in LaPlace, Louisiana on August 26. Though her image is not clear in the footage, Kailin Holland confessed she was the one who pulled the 16-year-old McDonald’s worker. 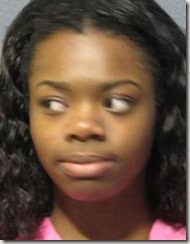 The driver of the car, presumed to be Holland, and the worker first engaged in a heated argument but it is not known who began the word exchange. The argument escalates and Kailin Holland can be seen standing up in the driver’s seat, she then reaches for the workers long hair and drags her out of the service window and into the side of her car, when a loud thud is heard.

The female worker is not seen after that point in the footage and is thought to have been left lying on the tarmac between the restaurant and the car after the beat down.

According to the Smoking Gun, three others have been accused of hitting the unidentified young woman. According to the Sheriff release, police arrived after a disturbance report was made, the victim described the scene and also said several other females punched her as well.

Kailin Holland and the others fled the scene in the car.

According to her Facebook page, Kailin Holland is an assistant Manager at Forever 21 and is listed as  ‘Married.’ No reason for the attack had been reported.

According to reports, Kailin Holland was released on $10,000 bond.