Joséphine de La Baume is a French actress who happens to be married to English musician, DJ, singer, and record producer, Mark Ronson.

La Baume must be very proud of her hubby who is currently nominated for a Moonman in this weekend’s VMAs! Her super star DJ hubby is currently nomintaed for “Best Pop Video” along with singer Bruno Mars for their smash hit song “Uptown Funk.” 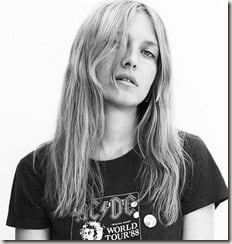 Josephine was born in France, Paris in 1984. She is the daughter of a Baron –who worked as an investment banker, theatre critic, and producer –while her mother ran a foundation for youth. She has one brother, Alexandre de La Baume.

According to her IMDb profile the actress and writer is known for her work in roles such as One Day (2011), Rush (2013) and Kiss of the Damned (2012). But the beautiful gal is much more, Josephine has done from acting, to  modeling and also singing.

According to The Guardian, her acting career began in 2010 and has included roles in One Day and Johnny English Reborn; then de La Baume makes up half, with her brother Alexandre, of the band Singtank, whose debut album gained a four-star review in this newspaper in 2012.

Modelling, on the other hand, she is keen to distance herself from. “I never considered myself a model. I had started acting and doing music, and then I got hired for fashion jobs, so I always felt like I was being hired as Joséphine. Especially since they would have to resize everything.”

De La Baume’s home with Ronson is in Notting Hill. Her most recent work includes filming a French TV series, “a comedy, set in the secret service in the 60s”. Meanwhile, Ronson lives between London and the US. She and Mark tied the knot on September 3, 2011.

You can find Josephine on Twitter here, Istagram here.