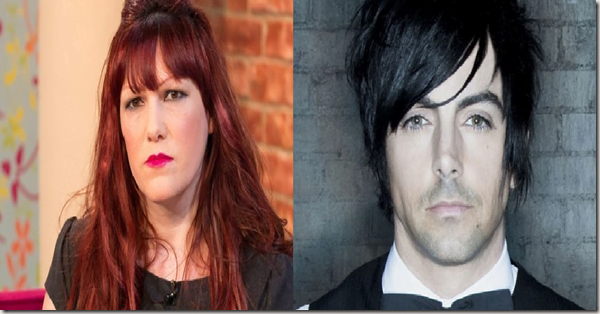 Meet 38-year-old  Joanne Mjadzelics, she is one of many girlfriends,  Lost prophets-singer Ian Watkins had. The red-haired woman gave a series of interviews following her former lover’s charges, arrest and ultimate jailed for 35-years after being found guilty of a string of *** offences, including the attempted rape of an 11-month-old baby.

Joanne Mjadzelics (a.k.a. Joanna Majic), the former callgirl who also claimed to be Watkins’ ex-girlfriend, was one of the first to come out and publicly talk about Watkins horrific doings.

On an interview with the Daily Mirror last year, she confirms her former beau was into abnormal behavior showing her footage of children engaging in sexual activities.

To cut things short during the video: according to Mjadzelics, Watkins was into all kinds of crazy *** ****, and once snorted ****** and then showed her a video of a girl somewhere between the ages of five and six being raped.

The interview also says, she believed evil Watkins, 36, attacked hundreds of youngsters across the globe while high on cocaine, crystal meth and ******. And that her boyfriend’s ultimate sick fantasy included to kidnap and kill children.

Now, new reports show Watkins might have created a monster! Apparently he is not the only one who belongs behind bars. The Daily Mail reports Joanne has been arrested and charged with possessing and distributing indecent images of children. Joanne who shockingly enough used to work as a private banking manager with the Royal Bank of Scotland was involved with the once high music profiled Watkins since 2006. She is being charged as part of Operation Globe, a worldwide investigation into Watkins’s child *** activities.

Mjadzelics and the pedophile singer met through the social network myspace. She had been a fan of his and on a stuck of luck she got in contact with him while trying to get free tickets for one of the bands concerts.

Joanne, from Doncaster, West Yorks had a son in 1996 but split with his father six years later.

Her charges include encouraging or assisting the commission of an offence of distributing an indecent image of a child. Joanne will appear before Cardiff Magistrates’ Court on March 21.