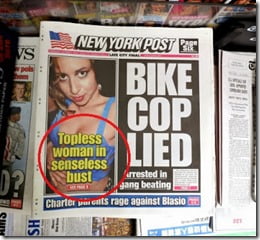 Meet 24-year-old Jessica Krigsman, she was born February 28, 1989. The young woman described as a “fire-eating striper” made the headlines today! The reason of her being a headline? Well she is reminding us all that is your legal right to walk around Brooklyn, topless!

The New York Post reports 24-year-old Jessica Krigsman was sunbathing in Calvert Vaux Park in July of last year, when she was approached by two officers, one female, and ordered to put her shirt back on. She was held for five hours at the 68th Precinct stationhouse and issued a summons for “obstruction of a sitting area” but even though the summons was dismissed, it wasn’t quite over for her.

Jessica who had been arrested for being topless in a Brooklyn park back in the summer of 2012, is now suing the city for violating her rights.  Her encounter with New York’s finest wasn’t exactly out of a T.V series but bottom line is she knew her rights, and the cops didn’t.

At the time, she engaged in a heated discussion with Officer Colleen Canavan and her partner, when they tried to make her put her shirt back on; although she debated it was her legal right she still ended up behind bars. According to reports Jessica is claiming in her lawsuit filed Monday in Brooklyn Supreme Court;  that the officers, one a two-time Cop of the Month, trampled her civil right to go bare-breasted.

“I’m gonna stand my ground, I’m not putting my top on,”

She said. Jessica is also known in the stripper world as Nikki Talis, her personal interests include Bodypainting, Horses, Dancing, Singing. She says about herself:

I am a freelance model devoted to all things artistic, beautiful and wild. I am an environmentalist and animal rights activist and am fond of projects promoting awareness and love of such ideas. For expression and creation. Existence and art

Jessica or Nikki, has work with several photoraphers, done some T.V appearances as well as adds, promos and art shows. She even has a modelmayhem profile you can see here.