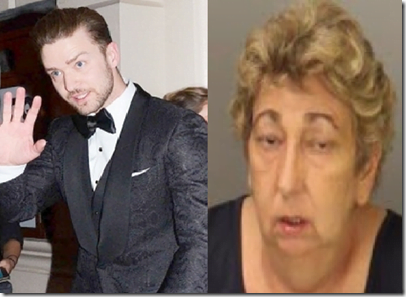 Meet Justin Timberlake’s aunt, Jane Harless. She is a 53-year-old lady living in Memphis, TN. Unfortunately Ms. Harless is making the headlines not in the best of ways; she has been accused of fraud!

According to the report with date Sept. 17, 2013; Jane is accused of robbing her family by writing herself checks from her brother and sister-in-law’s bank account. Investigators say she stole $64,700 between January 2011 and August 2013 by forging 121 checks. She was being held without bond at Shelby County Jail East until a general sessions judge can hold a full hearing.

Jane was born June 27, 1960. Jane currently lives in Memphis. Before that, she lived in Memphis, TN in 2001. So how did she get involved in all this mess?? Well pay attention; Jane is sister of Paul Harless who happens to be JT’s stepfather!

Justin’s mom Lynn Bomar, remarried Paul Harless in 1986 after her marriage to Randy Timberlake-Justin’s biological dad-ended in divorce in 1983.

Jane, Pauls’ sister and JT’s aunt worked for both her brother and sister-in-law and while employed, used their checking account to write herself checks by signing her brother’s name! She probably thought, well my brother is part developer of Mirimichi golf course along with Justin and part owner of the Memphis Grizzlies NBA team and happens to be married to Justin Timberlake’s mom who doesn’t need the money… right!

The checking forging scam has cost her not only her freedom but also the public shame to steel from a relative! She she was charged and detained for 121 counts of forgery; Harless was caught after police found proof that she was forging her brother Paul’s signature in order to make checks out to herself and then subsequently cashing them. Family members also noticed there was money missing from the account in question.

Justin’s family has said they want everything to be kept a private matter.