Stephen Hains is the longtime husband of TV/film actress and singer, Jane Badler -best known for her role in the 80’s science fiction series, V.

As a singer she has released three albums and often makes appearances at night clubs in Australia -where she has been living since the 90’s.
Jane made the move to Australia following her nuptials to husband, Stephen Hains.
Together they are the parents of two sons, Sam and Harry Hains. The couple along with son Sam, survive Harry -who died at age 27 on January 7. Though the official cause of death was not revealed, Jane said her son struggled with mental illness and addiction.

Their younguest son Harry, was an actor and musician who appeared in The OA, American Horror Story: Hotel and Sneaky Pete; and performed music under the name ANTIBOY.
Harry was a pre-med student in Australia, before making the moved to Los Angeles to pursue modeling. Though born male, he identified ‘in the realm of gender fluid’

The couple’s eldest son, Sam Hains is a Designer and A/V technologist. He graduated from the University of Melbourne with a Bachelor of Commerce and holds a Master’s Degree of Software Engineering. 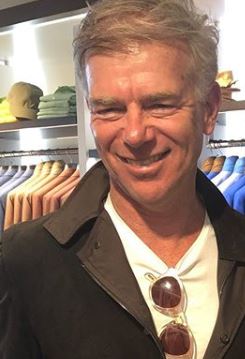 Stephen Hains is an Australian businessman; he has served as the Director at The Portland House Group Pty. Ltd. -for 32 years.
Stephen is one of three sons of billionaire, David Hains. He and his brothers, Richard and Michael, oversee different aspects of the family’s Portland House Group -which is a private hedge fund which employs about 85 people in offices in New York, London and its Collins Street, Melbourne, headquarters.

In 2014, Hains was featured in an article called ‘Uncovering Australia’s ‘hidden’ billionaires‘
Back in 2018, Stephen Hains and his wife, supported an outreach and inclusion program for Theatre and Production at the Victorian College of the Arts.