We are saddened to hear about the passing of 37-year-old Jamie Sangouthai, described as basketball player Lamar Odom’s long-time friend.

some reports say the cause of his sudden death has not been officially confirmed but according to the Daily Mail, Jamie sadly died after he overdosed on heroine; while TMZ reported Jamie died on Sunday at a hospital in downtown Los Angeles after 911 was called.

Jamie was better known for his appearance on Khloe and Lamar’s short-lived reality show, Khloe & Lamar. He was featured as, his true self and his close friendship with the basketballer and his then new wife. He lived in a loft next door to Lamar and Khloe on the show. He was also known for having worked for Lamar’s clothing brand, Rich Soil. 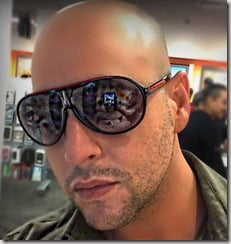 According to his Facebook, Jamie –who was born December 7 in New York –attended Christ The King Regional High School (Class of 1996) and studied IT management at  Rensselaer Polytechnic Institute in Troy, New York (Class of 2000). He lists CTKRHS, GE and Bear Stearns as previous work experiences.

The Woodside, New York native also lived in Fort Wayne, Indiana but had been living in Los Angeles for over a decade.

Under the Favorite Quotes section he wrote: “Nothing changes your opinion of a friend so surely as success – yours or his.”

The section, About Jamie reads: “I can only speak for, The things that I’ve been through….”

Many, including Khloe Kardashian –known to have had some differences with Jamie on the show –have expressed their condolences over his passing on social media.