James McCoy Taylor is a Texas native and one of the studs after lovely 2016 Bachelorette, JoJo Fletcher.

James McCoy Taylor is definitely into the art. The 6’2” singer-songwriter has a tattoo of the American flag and eagle on his left arm/shoulder.

The Funny, outgoing and kind Taylor, can sit still through Brave heart, Gladiator and Wedding Crashers.

James McCoy Taylor is a Michael Jordan fan and when choosing between the party-starter,” “the wingman” or “the laid back one”? he answered, party-starter all day!

James attended Harding University as a Public Relations major. According to a student profile, James played country music across the state of Texas by himself, and with the Redmond Road Band.

James McCoy Taylor fell for music after he worked for a producer who made all kinds of music from all different genres. Following that experience he was motivated to record and produce others, as well as diversify his own music. 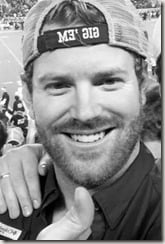 If he could pick any other job, he said he’d gladly be a “starting NFL QB. Because? “How much fun/pressure would that be? Hero one week and hated the next… Love that pressure.”

According to some sites, James McCoy Taylor was working as a sales representative for ABC Home and Commercial Services with his music being more of a hobby. We all know how it is for emerging musicians, right. Taylor had some videos showcasing his music up on YouTube, but they have since seemingly been made private.

He’s definitely has won many hearts since his social audience has gone up to over 80K followers on Instagram, that should help with his music pursuit. Truth be told we think he actually is talented, you can listen to his song “Fairytale” here.

We couldn’t help to notice, James McCoy Taylor is really making progress with his true passion, according to his Twitter account, he recorded his first song in Atlanta earlier this month. His Instagram is full of little snippets of his original songs, including one he wrote just for Bachelorette JoJo. He goes by James McCoy professionally to distinguish himself from any competitors.