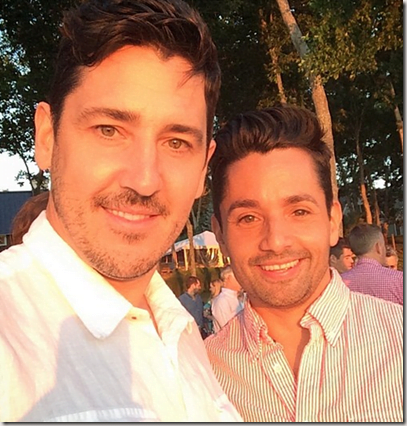 Fitness coach Harley Rodriguez, has been the partner of 80’s pop icon and NKOTB member Jonathan Knight, for the past seven years!

The couple has made a big step into the public eye by entering into this season on The Amazing Race! 41-year-old Harley is originally from Downey, California and is a graduated from Warren High School, Downey Ca.; according to his Facebook page. Since 2005 he has been a member of Barry’s Bootcamp NY, there, he is a master trainer and a client favorite according to his profile. His talent have made him a mentor to many a fellow Instructor over the years, earning him the well deserved title of Master Instructor. Harley is apparently also sought after because of his playlist, his profile claims your Barry’s Bootcamp experience isn’t complete until you’ve tried him. Now we know what the connection between Rodriguez and Knight is! We’re pretty sure you can find the New Kids hits on his music selection. In recent interviews the couple claims, the hit CBS reality competition show helped Knight overcome his anxiety. For Harley even though he dates one of the biggest teen idols from the 80’s he likes to keep things low key, they enjoy hanging out with friends and traveling and Broadway.