Kathleen’s husband is well recognized as the host of Hardball on MSNBC, however he is no more. The 74-year-old announced his exit on the show last night amid accusations of inappropriate comments. Some reports say Matthews’ firing was masked as a retirement. What do you think?

Journalist Laura Basset accused the iconic host of telling her ‘Why haven’t I fallen in love with you yet?’

Born Christopher John Matthews on December 17, 1945; the Pennsylvania native began his career on television in 1994 as host of a two-hour nightly program on the NBC-owned America’s Talking network. He hosted Hardball for more than 20-years.

Someone not very proud right now must his wife of decades, Kathleen Matthews. The couple has been married since 1980 and together are the parents of three adult children; Michael, Thomas, and Caroline. 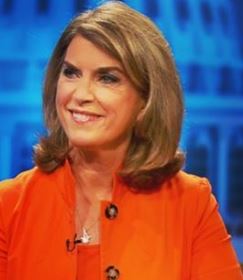 Kathleen Matthews was born Kathleen Ann Cunningham on August 9, 1953. The California native isn’t exactly an unfamiliar face. Kathleen Matthews is a former reporter, the former Executive Vice President of Marriott International and the former 2016 Candidate for US Congress in Maryland’s 8th District.

Kathleen Matthews graduated from Stanford University in 1975 before moving to the DC area where she joined WJLA-TV as a production assistant. During that time she served in various roles including producer, reporter, and anchor. She also hosted the shows Working Women and Capital Sunday.
During her news career, she was the recipient of 9 local Emmys, and an Edward R. Murrow award, an Associated Press award, a George Foster Peabody, a Scrips-Howard, an Ohio State and Gracie Allen awards.

After working at WJLA for 25 years, Matthews retired to pursue public relations. She took a job as the Chief Communications and Public Affairs Officer for Marriott International in 2006, where she worked until 2015.
Matthews then decided to run for office, and she entered the race to be Maryland’s 8th Congressional District Representative to Congress. Though she did not win, she became Maryland’s Democratic Party chair in 2017. She held this position until December of 2018.

In addition to a long career in different fields, Kathleen Matthews has also sat on several organization boards, including the Catholic Charities of Washington.