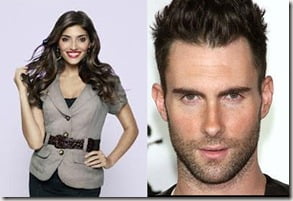 Levine broke up with Behati a month ago. He met Amanda through mutual friends reportedly on the set of The Mindy Project on Fox. The couple immediately clicked and began spending time together.

“Adam and Amanda have just started dating each other, and it’s still early days,” a friend of Amanda’s told Radaronline. “They met around a month ago through mutual friends and instantly hit it off, and they have gone on several dates since.”

Amanda Setton was born on December 16, 1985. She is best known for her role as Penelope Shafai in the teen drama Gossip Girl and for her role as Kimberly Andrews on One Life to Live. She is currently appearing in Love, Loss, and What I Wore. Despite her being written out of Mindy Project, Amanda scored a recurring character role on the CBS show Golden Boy, premiered Feb 26/13, according to Wikipedia.

She was born in New York and grew up in Great Neck. Setton graduated from Ithaca College and in her junior year she studied abroad in Barcelona Spain in an IES program. Amanda completed a comprehensive 2 year Meisner Technique program at The Actors Workshop of Ithaca.

Levine has reportedly developed a reputation for being a ladies man, which worries Amanda’s friends.

“He doesn’t seem to go often without having a glamorous supermodel on his arm, so there’s a worry Adam could be playing Amanda. We’ll just have to wait and see. At the moment, they’ve just started seeing each other, we’ll soon know if it’s serious or not.”

Recently, Adam Levine said that his ideal first date is eating a cheeseburger:

“I always like to dress up in a tuxedo and tell the girl to dress real fancy. I like to pick her up and go to McDonald’s in a tuxedo…. It’s a good spontaneous, romantic thing you can do that’s also cost-effective. What if you don’t like the person? It’s only the first date … Her world will be so rocked.”