Eugene Casciaro is the man who’s been allegedly dating reality TV star Kenya Moore, and apparently is not a good thing! Recent reports say Eugene Casciaro, could be no good for the Real Housewives of Atlanta member.

Eugene Casciaro was introduced was Kenya herself recently, she posted a photo of the pair on Instagram as well as during her hair care launch in Atlanta.

According to RadarOnline, Eugene Casciaro has a dark history of violence. Apparently he has a lengthy criminal record, that includes charges on assault!

Back in 2007, Casciaro, was allegedly arrested and charged for simple assault/battery but the story doesn’t end there. Police were called at a high-end sushi Atlanta restaurant after his disruptive behavior was reported.

He allegedly made terroristic threats at sushi hot spot Geisha House, terrifying an innocent couple and causing chaos that turned physical in the eating joint.

The victim told Radar, Eugene Casciaro was drunk at the time of the violent episode,  an according to the police report, Casciaro punch him in the back of his neck multiple times. 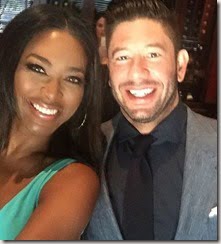 39-year-old Eugene Casciaro is/was the Chief Executive Officer at Nvision Truck Sales Inc. Has been described as a ruck dealer by media reports.

According to LaLate reports, the case against Eugene Casciaro  dragged for two years before he entered a negotiated guilty plea for the three criminal counts. He was then put on probation for twelve months, given 100 hours of community service, and ordered to pay fines.

The gorgeous 44-year-old former Miss USA turned actress, producer, writer and director hasn’t been lucky in the love department. The Detroit native and former psychology major –appeared earlier this year in Celebrity Apprentice, she was romantically linked to African Tonye Cole –who is the co-founder of Sahara Energy but it turns out Cole is married.

She was later linked to James Freeman, a Princeton educated investment banker she met while on Millionaire Matchmaker and who later got married to his log time fiancé, leaving Kenya heartbroken.

Through his social media, we found out Eugene used to date Jessica Muenster.

Do you think she deserves better than Eugene Casciaro?