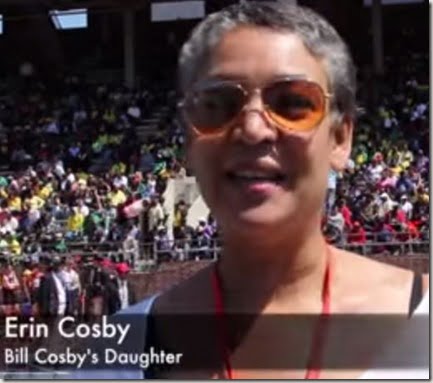 48-year-old Erinn Chalene Cosby, the daughter of iconic funny-man Bill Cosby, has been revealed to have had drug problems in the past.

Her famous father who’s been under media scrutiny following several rape accusations might have revealed her daughter’s past struggle with substance abuse to cover his own scandal, reports suggest. Erinn who is a photographer has held exhibitions at the Smithsonian Museum in Washington D.C. and at the Lincoln Center for the Performing Arts as part of the New York Film Festival in New York City.

Her parents got married on January 25, 1964, and she is one of the couple’s five children: Erika, Erin, Ennis, Evin and Ensa. Her borther Ennis, and her parent’s only son was murdered in 1997. Each year at the Penn Relays, the Prep School Boys 4x400m race is dedicated to the memory of Bill Cosby’s son Ennis Cosby. Last year, in 2013 Erin honored her brothers memory as the starter for the race, you can watch her on the video below.

The recent report claims when Erinn was in her early 20’s she struggled with drug and alcohol problems, at the time she accused Mike Tyson of having sexually assaulted her in his New Jersey home.

Cosby’s second-born daughter, Erinn is pictured below at a younger age. Bill Cosby demanded both seek treatment; Erinn was estranged from the family until her brother Ennis’ death in 1997.