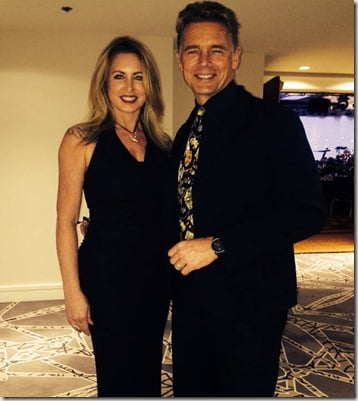 Meet actress Elly Castle, better known to be the gorgeous wife of “Dukes of Hazzard” actor and singer John Schneider. Elly Schneider has been married to John (aka Bo Duke) since July 11, 1993. She was born Elly Castle on September 15, 1960 in New Jersey.

According to an IMDb profile the former actress is known for Collier & Co. In the 2006 movie, also starred by John Schneider, the couple share a passionate kiss. Watch below!

Castle attended the American Musical and Dramatic Academy in Los Angeles. She is also a mom of four but the 54-year-old is in great shape! She has two children from a previous relationship; daughter Leah, born in 1984 now 30; son Chasen Joseph born in 1991 now 22 and one daughter with hubby John; Karis Lynn born in 1993 now 21.

According to an article from christianitytoday, she got pregnant at 15, she gave birth to a baby-girl whom Elly gave up for adoption. She and her daughter Mandy were reunited 21-years later and she found out she was a grandmother to Mandy’s child who is now a married woman who lives in Atlanta.

Her hubby was previously hitched to former Miss America Tawny Elaine Godin from 1983 to 1986. We’ve heard that Elly has been contacted to submit a tape on “The Real Housewives of Beverly Hills,” she seems to be thrilled about it, she told TMZ that her husband John’s agent was contacted by producers to see if she was interested in submitting an audition tape and she has! So the green eyed blonde is currently in talks to become part of the hit Bravo series.

Elly and her hubby are both Christians but oddly enough during her audition tape for The Real Housewives of Beverly Hills, it has been revealed she and John, married for the past two decades are in fact separated. In her audition tape, Elly takes fans inside her Santa Monica condo, which overlooks the Pacific Ocean. John, who recorded the tape, makes an appearance, but apparently, they aren’t actually together at this time. As Elly notes in the video, she lives alone, but she and John appear to be on good terms.

Would you like to see her on the show? She might not live exactly in Beverly Hills but Santa Monica is close enough plus is not a requirement to live there to appear on the show.