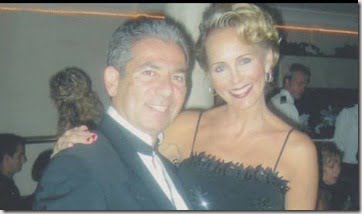 Ellen Pearson, other called Ellen Pierson, and other even called her Ellen Kardashian, but one thing that is 100% accurate is that Ellen was married to Robert Kardashian at the time of his death. The deceased Kardashian, the lawyer famous for representing OJ Simpson, was previously married to Kris Jenner and together they had the famous TV reality stars: Kim, Kourtney, Khloe, and their brother Rob.

Ellen is now in possession of Robert’s diaries and she passed them to In Touch magazine, who released some parts of it. She told the mag:

“These are authentic handwritten journals I have shared, that my late husband Robert Kardashian so carefully wrote during 1989 and 1990 at a most trying and touching time of his life. They are my personal possessions and he left them to me on his passing.”

The Kardashian family is sewing her for selling his diaries and personal photos to the tabloids. Ellen openly claimed that their mother Kris Jenner kicked and beat Kim when she was little:

“Kris was kicking and beating her and said she was going to kill [Kim]!” Robert claimed in his diary on Aug. 24, 1989. “Kim was hysterical.”

“So my dad’s ex is selling ridiculous stories again to tabloids! Do not believe it! Sad when people need $ & get desperate,” Kim wrote. “10 yrs since dad passed &this woman he married 4 2 wks before he died needs 2 get a job instead of trying 2 destroy families w fake stories.”

“PS that story that my mom beat me & threatened to kill me hahahhahaha! I’d beat her! JK truly laughable!”

Khloe also had something to say:

“You have no right to even mention our names especially my mothers! We don’t know you!!! How dare you spread such lies! You are a disgrace,” she tweeted. “10yrs after my fathers passing&now that she has filed for bankruptcy… NOW she sells FALSE stories. Hope that money buys you water in ****.”

Ellen Pearson married Robert Kardashian after 6 years dating, in 2003, two months after he lost his battle to esophageal cancer on September 30, 2003. The couple got engaged in 2002. Ellen has no children of her own.

Ellen worked as a an Account Manager for CV Escrow  in 2008 and as Regional Director Sales and Marketing at Heritage Escrow.