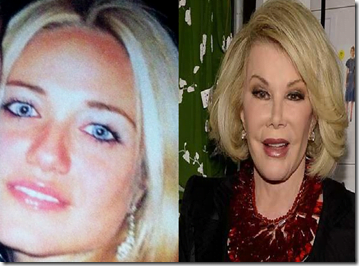 Meet 41-year-old Elizabeth Hazan. She’s been making the headlines as the bottle-blonde socialite who is the middle of a battle with the queen of E’s Fashion Police Joan Rivers.

“Her problem with me is that I’m young, she’s old, I’m beautiful, she’s ugly,”

Said Hazan with her French accent since she hails from Canada and who is half River’s age. The pretty blonde rampage of insults comes after a Belize-based holding company to which she is connected responded to Rivers suit by slapping the funny woman with a $15 million claim Wednesday. She is accusing Rivers of personally committing “physical sabotage” at the East 62nd Street unit where she once lived, she says Rivers is responsible for gluing the lock shut, ripping out cable wires and stopping mail delivery.

The company, Real Estate Holding Group, now owns the $2 million unit in which Hazan once lived.

“It’s personal between her and me,”  “It’s been that way ever since I moved in 2005. She spat in my face and called me a ***** in front of my mother and brother when they were visiting me. Most mean woman you can imagine.”

According to her, Rivers singled her out because her former $2 million pad is the humblest in the opulent 8-unit building, where River’s penthouse is worth up to $30 million where Rivers has  been the condo board president for the past 10 years.

The blonde bombshell who’s Facebook displays nothing but a couple of pictures from her home lives mostly on exclusive Fisher Island off Miami but her desire was to turn the condo into a showplace. 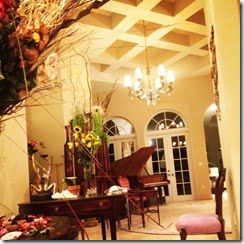 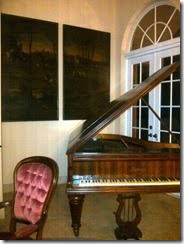 The former building occupant Elizabeth Hazan who signed her condo over to in July tried to stay at the unit on Sept. 28 and with the current owner’s permission but was denied by the doorman!

The socialite owns a $5 million mansion in Florida but has been embroiled in in a battle over $200,000 in unpaid condo fees with her former condo board president. Could it be the blue-eyed beauty doesn’t know what she is getting herself into? Is she going to far with the personal comment to Joan?

How do you think the catfight will end? 80-year-old Rivers might have found her match! At least in the tongue acid comments!

Here is a court decision document where Hazan was absolved of a lawsuit back in 2009 where she was being accused of living precisely in the condo at River’s building but that at the moment she had rented to someone else.