Ed Waisbrot is one among the men casted in season 16 of The Bachelorette, originally starring Clare Crawley who has now been replaced by Tayshia Adams.

Ed hails from Miami, FL.; and he definitely has that boy next door look going on but don’t be fooled by his appearance since he has been labeled as one of the season’s villains. In one promo, he’s seen arguing with Clare. Yikes!

36-year-old Ed is a health care salesman. He attended University of Pittsburgh -where he obtained his Bachelor of Science in Business Administration, Accounting and Marketing in 2006.

He began his career working at Deloitte in 2006 where he was part of the External Audit Staff. In 2007 he moved on to FIS, where he served as a Senior Pricing Analist. From 2010 until 2012 he worked for Lockheed Martin Corp.; as a contracts negotiator. He then worked at Vault Wealth Management as a Business Development Manager until 2014. From 2014 until 2017, Ed was hired at CPS, as a Client Account Manager. Most recently he was a solution advisor at McKesson. According to his LinkedIn, he is currently listed as an Strategic Account Executive at CVS Health in the Miami/Fort Lauderdale Area. 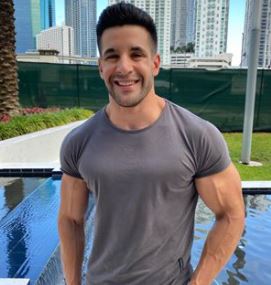 Ed is a simple fashion kid of fella, judging by his social media, his preferred style is a simple T-shirt and jeans combo. Based on his buffed arms, he doesn’t have any problems satyin in shape. We might also add that he appears to be a loyal friend, as he has numerous photos with the same group of men and is clear they have known each other for years.

Is also clear Ed is mindful of his privacy and though is active on social media, he hasn’t shared much. With over a thousand followers on IG, his feed only features a handful of photos.

According to his ABC bio, Ed has been single for over a year and he claims to be finally in a place mentally and professionally to make finding his soulmate a priority. His hobbies include kayaking or paddle boarding and his biggest turn on is a woman with beautiful eyes.

Thoughts on Ed Waisbrot? Check him out on Instagram here.