Susan Pinsky is the lovely wife of internist and media personality, Drew Pinsky -whom you may recognize best as Dr. Drew.

Susan’s husband is admitting he blew it when he downplayed the deadly virus coronavirus also known as Covid19 and has apologized for his comments.

Born David Drew Pinsky on September 4, 1958; the California native has led a multi-faceted career. He’s been a fixture both on television and radio after combining his medical practice and a successful media career. He is a doctor of internal medicine/addiction specialist.
Most of us came to know him as the host of the hit MTV reality television series, Teen Mom OG, as well as all of the Teen Mom 2 reunion specials. Drew also hosted for several years the Dr. Drew Show on HLN. He is in addition, a New York Times bestselling author.
The celebrity doctor is currently the host of Ask Dr. Drew and also produces a podcast, Dr. Drew After Dark.
He received his undergraduate degree from Amherst College and his M.D. from the University of Southern California, School of Medicine, where he remained for his residency. He then became Chief Resident at Huntington Hospital in Pasadena.

Dr. Drew is happily married to wife, Susan Pinsky. The couple has been married since 1991. Susan a former radio host for at KROQ F.M. and UCLA graduate -met Dr. Drew in 1984 after she was invited to his show, ‘Loveline’ 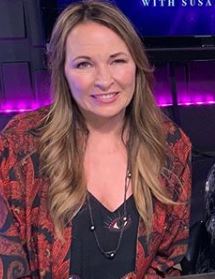 Susan Sailer Pinsky nowadays runs her own podcast company but perhaps is known best as the producer and host of “Calling Out with Susan Pinsky,” which features the world’s best psychics as well as celebrity guests. Susan was the recipient of the LA Music Award for “Best Radio Host” in 2016.
She is the creator and CEO of Playroom Podz. She is known as the producer and podcast provider for This Life #YOULIVE” with Dr. Drew as an offshoot to support This Life with Dr. Drew and Bob Forrest.
She is the mother of the couple’s triplets; Paulina Marie Pinsky, Jordan Davidson Pinsky and Douglas Drew Pinsky.
The lovely professional, spouse and mom of three, has graced red carpet events numerous times next to her hubby.