Doug Rasheed is the husband of The Queen of Funk, Chaka Khan. His 62-year-old iconic singer wife will appear in the upcoming season 21 of DWTS!

Chaka Khan was born March 23, 1953. The 10-time Grammy winner is known for her 1984 hit song “I Feel For You”, for her smash hit “I’m Every Woman” and as a member of the funk band Rufus, with whom she recorded the legendary soul record “Ain’t Nobody.”

Grammy Nominated Record Producer Rasheed and Khan have been married for 14-years. He is her third marriage. She was married for a year to Hassan Khan from 1970 – 1971. She then wedded Richard Holland, they have one son together, Damien Holland.

Chaka is also the mother of daughter Indira Milini, from her relationship with Rahsaan Morris. 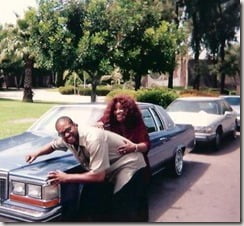 Rasheed is known known for producing Coolio‘s Gangsta Paradise and 2Pac‘s Only God Can Judge Me. According to his profile in Discogs. Other tracks produced by Rasheed include Ratha Be Ya *****, Warm Summer Daze, Sittin Up in My Room, Ugly Bitches, Coming Back, Chocolate, Enonisha, etc.

You can also see a list of all the tracks produced by Rahseed here.

Doug is a self-taught musician, producer, songwriter with a diverse spectrum of styles that goes from working with legendary Tupac Shakur’s “Only God Can Judge Me” and “All Eyez On Me’ and the great Barry White’s “Which Way Is Up” from the album “Staying Power.”

According to his page, Rasheed currently keeps busy running Doug Rasheed Entertainment and Madcastle Productionz. His companies focus on film, T.V., and video, as well as artist development, production and songwriting.

Khan, the woman with the big hair,  will be going up against Nick Carter, Hayes Grier, Victor Espinoza, Bindi Irwin, and Alexa and Carlos PenaVega.

Think she has a chance?