Meet Dorothy Jo Gideon, was the loving and beautiful wife of Bob Barker, former and dear host of the television show The Price is Right from 1972 to 2007 when actor Drew Carey took over the hosting gig. 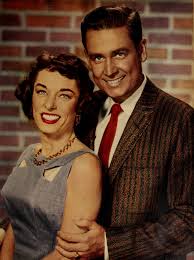 Bob Barker is going to turn 90 on December 12 of this year. On that day he will surely be thinking of his one true love, his wife Dorothy Jo Gideon. She’s been gone for many years now but remains very close to his heart.

He and D. J., as he called her, met in high school. Bob was 15 and a junior at Central High School in Springfield, Mo.His family had just moved there. On their first date, they went to an Ella Fitzgerald concert. They were married on January 12, 1945. They eloped to St. Louis, while Bob, then a Navy pilot was on leave. Bob says, “We fell in love as kids, and we stayed in love.” They were married for 36 years.

In 1947, Barker landed a job as a sportscaster and DJ.He was asked to stand in as an emcee on an audience participation show, and he loved it. Dorothy Jo encouraged him to go into it as that was what he was meant to do. And boy, was she ever right! The rest is history as they say.

A friend recalls that she was a very funny woman and that once when someone asked her what was the secret of her happy marriage she simply said, “Two things, I love Bob Barker and Bob Barker loves Bob Barker.”

You only love once! or Twice

On October 19, 1981; Dorothy Jo died of lung cancer. They never had any children. Shortly after her death, Bob took up animal rights in order to keep doing something she had loved.

Although he has never remarried, he has had a few relationships since then. He was involved with Dian Parkinson from 1989 to 1991. She later sued him for sexual harassment but dropped the charges. Bob admits there was something going on but says it was consensual.He has been sued by six other women who have received financial out of court settlements.

He is presently involved with animal rights activist Nancy Burnett, with whom he has a comfortable relationship. But Bob has said that he will never marry again. In his words, “Dorothy Jo was the love of my life.”