Meet 49-year-old Dinah Englund, the daughter of iconic actress Cloris Leachman. Both daughter and mom will be featured in the next episode of Wife Swap!

89-year-old Cloris lives with her daughter in Topanga, California according to UPI. Dinah is one of five children, her mom and father, Hollywood impresario George Englund had. Her parents were married from 1953 and divorced him 1979. Cloris never married again. 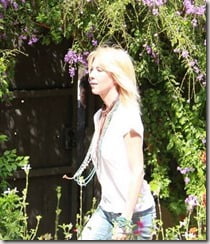 Dinah is the only woman among four brothers: Bryan, Morgan, Adam and George. Her brother Bryan died in 1986.

Dinah is married to husband Tom, together they have one daughter named, Hallelujah. The couple –who are vegetarians –are also in the candles business.

The couple owns “Topanga Candles” were they work together making a artisan candles. According to their website, Dinah left her home at 16, to finish high school in Paris. She lived in several places and speaks four languages.

Dinah came from a highly creative, boundary free upbringing while Tom rose from structure and a firm belief in Catholicism. Tom is a Republican, Dinah, a Democrat. Dinah believes in the Universe. Tom believes in the hard facts. Dinah loves to shop. Tom would rather shoot himself. Dinah loves great food or she won’t eat it. Tom is part of the, “Clean Plate Club”. Dinah is always cold. Tom is always too hot. Dinah says whatever is on her mind. Tom can think for days before speaking. Tom loves The Grateful Dead. Dinah loves Django Reinhardt. Tom can fix anything. Dinah can fix broken hearts.