Derrence Washington is the husband of Gawker owner, Nick Denton. The couple has been married since 2014.

According to his bio, Derrence Washington is a trained actor and improvisor. At first it was reported he was British like, Denton but Derrence was actually born and raised in Houston, Texas –where he attended Madison High School.

Derrence Washington attended Tisch School of the Arts at NYU with a focus on Drama. He also began studying improv at the Magnet Theater in 2012 and has since trained at The Upright Citizens Brigade and The Annoyance Theater.

Derrence Washington has an extensive background in theater and short film. According to his Backstage page, he’s been in over a dozen theater plays including: The Future, Almost Home, Richard III, A Troubled Heart, How To Cook Your Wife, The Rimers of Eldritch, We Were Dancing, Hamlet, among others. His film credits include: The Trickster and Hipster Treatment.

Nick Denton, an Oxford graduate, worked as a writer for Financial Times. He created Gawker Media in 2002. The Internet entrepreneur also owns Gizmodo, Jezebel, Deadspin and others. He is an expert in outing celebrities, publishes photos of male genitalia, pays sources and appeals. He is currently in trial for the publishing of a *** tape involving Hulk Hogan. 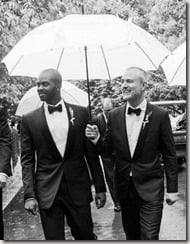 Rumors of Nick and Derrence dating first surfaced back in 2012. Derrence Washington met Nick back in 2011, at the time he was in a relationship with another man. It was Derrence’s boyfriend who told him about Nick and his successful site, but Derrence wasn’t very interested.

After briefly meeting Mr. Denton at one of his loft parties, Washington accompanied his boyfriend to a weekend gathering at a house in Hudson, N.Y., at which Mr. Denton was also a guest. Sparks flew when the two shared a game of badminton.

According to the NY Times, the two began spending time together, with other people around. By 2012, Derrence Washington left his boyfriend of several years and moved with a friend. He and Denton soon began dating.

The following year, Denton proposed to his actor boyfriend and they were officially married in May of 2014.

The couple tied the knot at the American Museum of Natural History. Denton who is now 49-years-old, is 16-years Derrences’ senior –who is 33-years-old.

He and his man are currently living in New York City.