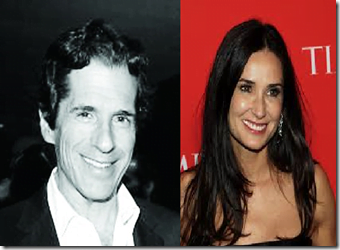 New couple alert! Well the news is not confirmed just yet but according to online gossips 50-year-old “Striptease” star and 66-year-old business man Peter Morton might be an item!

Do you think this is possible? After all our Demi is been known for having a preference on younger fellas! According to sources the alleged couple have been spotted together and meeting, up to three time a week! So unless our leading lady is thinking about opening a new restaurant the pair are enjoying each others company for sure.

The older and mature Morton might not be her type but an insider says:

“Demi says that thanks to Peter, her toy boy fascination could be over … at 66, she never thought he’d be her type, but she really likes him,”

Does his name ring any bells? Well to make things a little odd, she was romantically linked to Morton’s son earlier this year! Harry Morton 31, and although that didn’t work it looks like Demi is keeping close ties with the men in the family! Some sources say it was actually Harry who brought the pair together! A little lost there but hey! If they are happy we are happy for them!

Relationship or not things between them are progressing, Demi’s girls Rumer 25, Scout 22 and Tallulah, 19 have all met and sealed approved of their mommas new beau. They met Peter at a recent party at his Beverly Hills home and they think he’s “charming” As is to be expected, Peter has had his share of women. He was married twice; first to British model Paulene Stone who is the mother of son Harry; second wife is Tarlton Pauley-pictured above with the dogs- with whom he had two children but also ended in divorce in 1997.

The Denver University graduate and member of the Board of Trustees for the Museum of Contemporary Art, Los Angeles, most recently he was in a long relationship with model Linda Evangelista but broke it off last June.

So what do you think of Demi’s new flame?