Demar Jackson is one among the men casted in season 16 of The Bachelorette, originally starring Clare Crawley who has now been replaced by Tayshia Adams.

Demar Jackson like most of the contestants, stays in shape, in fact he is a fitness instructor. Jackson hails from San Diego but is currently based in Scottsdale, Arizona.
He attended Arizona State University for his undergraduate studies and Clemson University for his master of science degree.

According to his LinkedIn, Demar graduated in 2016 with a Bachelor of Science (B.S.), Exercise and Wellness from Arizona State University. He earned his Master of Science (M.S), Parks, Recreation and Tourism Management in 2018.
He is currently listed as a Fitness & Wellness Graduate Assistant at Clemson University. In the past, he also worked as a fitness and wellness intern at FitPro Services, LLC.; and served as a certified personal trainer and Adaptive & Inclusive Recreation Specialist at Sun Devil Fitness Complex.
From 2014 until 2016, he served as Indoor Cycling Instructor at The Madison Improvement Club and most recently was a CycleStar at CycleBar. 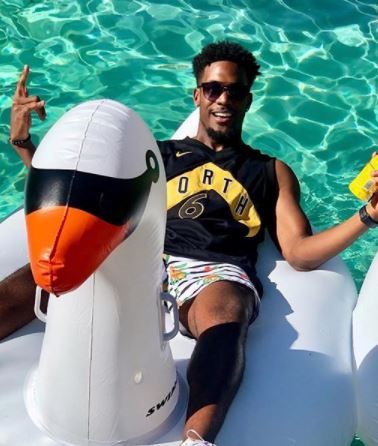 Demar Jackson was also certified Master Trainer by Technogym and got a personal trainer certification from the American College of Sports Medicine in 2018. Furthermore he is a Group Gitness Instructor by FitPro. He also received a CPR Professional Rescuer and Frist Aid/AED from the American Red Cross.

The 26-year-old also keeps active on social media, where he has little over 8k followers and keeps his page updates with numerous photos of him working out or simply having a good time with friends.

Demar will definitely keep you entertained and motivated! According to his ABC bio, he has a passion for spin, though Demar’s dream job is actually to be a DJ on the Las Vegas Strip.
Demar who writes poetry in his spare time and lists Denver as one of his favorite cities; also says he is ready to find a wife and enjoys meeting new people at local restaurants and bars.