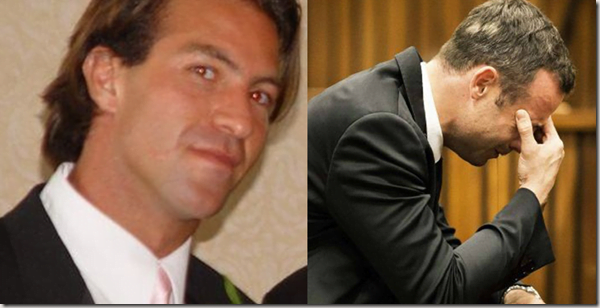 It is day seven, of Blade runner’s trial and is turn for Darren Fresco, a.k.a The Frisco kid to take the stand.  Fresco is the guy who was present at both incidents which led to Pistorius being charged with recklessly firing a weapon, and things are not looking good for “the accused” as Fresco referred to as.

He  testified on the Tasha’s shooting incident, as well as the incident in which Pistorius fired a shot through the sunroof of a car. Darren was driving the car that got pulled over for speeding and said Pistorius and the police officer engaged in a verbal dispute.

Fresco said that after they drove on, Pistorius fired a shot through the sunroof without warning.

Of that incident he said

“The sound went off by my left ear. I ducked, then I saw him bring the gun back in through the sunroof,”
“Without prior warning, he shot out the sunroof,” he said. “Apologies for my language my lady, but I asked him if he was f**** mad.”

Then when questioned about the restaurant episode Fresco declared

“We had been to the shooting range before and he had a big love for weapons,”

“My assumption was he had competency with it and when I passed it I told him ‘there is one up’.”

Fresco said he saw Pistorius making a “shoulder gesture” and assumed he was taking the bullet out of the chamber but then the gun went off. He then told the court Pistorius asked him to take the blame and he did. Fresco is widely knowledgeable in both weapons and cars, his Facebook page is plagued by pictures of fast cars. Darren Fresco is an associate of the Daytona Group. He was also present for the Top Gear (series 21) earlier this year.

According to his Facebook he is currently married to wife, Beatrix Leopold Fresco (pictured below). Fresco has been getting an outstanding amount of support from his friends, his Facebook wall has been outpouring with comments of commendation, like

-Big ups champ that was heavy much love

-You did really well!

-Well done for today Da, really could not have been easy and you did very well.

Well done Darren! Considering the pressure being on the stand, you have done well!

How do you think he did?