Dale Moss is one among the men casted in season 16 of The Bachelorette, originally starring Clare Crawley who has now been replaced by Tayshia Adams.

Rumor is that 32-year-old Moss is now out of the show after Clare Crawley fell in love at first sight. Though their chemistry was felt during the season premiere after Clare honestly exclaimed “I definitely feel like I just met my husband” -it seems like their relationship may have started prior to filming.

While we sit tight waiting for everything to be clearly explained, lets find out just who is Dale Moss exactly? 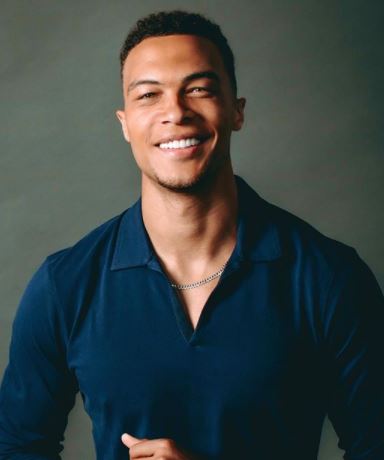 Born September 24, 1988; the South Dakota native is a former NFL Athlete turned model and host. He is the son of Delores and Dale Sr., who were married for 40-years prior to his mother’s death in 2017. According to Dale, his mother who was white, was disowned by her family for marrying his father, a black man.
Dale is the only boy out of five children. His sisters are named Robyn, Jessica, Candace and Amber -who has a physical disability. As a result, Dale is heavily involved with the Special Olympics.

Dale initially played basketball at the University of South Dakota. He was on the football team for one year—where he played as a wide receiver. He then signed with the Green Bay Packers as a free agent after graduating in 2012. Dale is also linked to football through his uncle who is, Heisman trophy winner Johnny Rodgers.

Additionally, the 6’3,” athlete went onto play with the Tampa Bay Buccaneers, the Chicago Bears, the Carolina Panthers, and the Los Angeles Kiss—a professional arena football team.
After three years in the professional sports industry, Dale changed his path to modeling and entrepreneurship.

The former NFL wide receiver, works as model in NY.; in 2013, Dale signed with the Wilhelmina modeling agency. Furthermore, he also has his own website, The Dale Moss Brand and a podcast, ‘The Game Plan with Dale Moss’