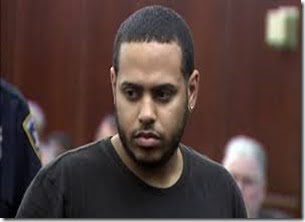 Of Passaic, N.J., a man by the name of Christopher Cruz has been appointed as the responsible for the hideous attack on a Range Rover driver on the Westside Highway in Manhattan over the weekend. The road rage that caused Alexian Lien and his family terror and left biker Jeremiah Mieses paralyzed from the waist down.

The incident occurred on September 29 and thanks to a viral video that was leaked online it has caused furor among people all over; some taking sides with 33-year-old computer engineer Alexian Lien and others defending the bikers.

The footage shows a group of bikers surrounding the SUV on the West Side Highway on Sunday after an altercation. The SUV driver took off, plowing through the crowd; among them 32-year-old Jeremiah Mieses. Police say the bikers chased the driver, ambushed his car and attacked him, beating him in front of his terrified wife and toddler.

According to publications Cruz was part of the initial confrontation when he accused Lien of cutting him off on the Westside Highway. The picture below is believed to be Cruz; while he deliberately intended to be struck by Lien’s SUV as his response for moments earlier of being cut off.

He allegedly did not take part of the group that pursued Range Rover driver, Alexian Lien, up into Washington Heights; he says he remained in Harlem as his fellow bikers sped off in pursuit of Lien and eventually beat him up. The 28-year-old was charged Wednesday with reckless endangerment, reckless driving, endangering the welfare of a child and menacing. His bail was set at $1,500 cash; his attorney said Cruz even got off the motorcycle and tried to start the procedures for an accident report and that his client denies all the allegations.

He was hospitalized after the incident with minor back pain but released soon after. Cruz and the rest of the bikers were taking part in a ride loosely organized by a group called Hollywood Stuntz.

What do you think of this terrible incident that has struck so many innocent lives?? Some of the stands we’ve heard say:

“Cruz should be held accountable for what happened to his fellow cyclist as well as the others involved in intimidating Lien. They ultimately are the reason why the one cyclist may now be paralyzed for life”

What, do you think, who should be punished?

His arrest became official on Tuesday morning at 1 a.m. and was arraigned just hours later