Born Robert Lane Saget on May 17, 1956 in Philadelphia, Pennsylvania; His comic skills emerged at an early age. At Temple University, Saget pursued his love of film. After graduation, he spent years on the comic club circuit, developing an act based on free association and his own unique commentary. Along the way, Saget befriended fellow comedians Gary Shandling and Dave Coulier.

Starting in 1987, after a short stint on The Morning Program, Saget played one of TV’s nicest, albeit wimpiest, dads on the sitcom Full House. Saget took on another show in 1990, becoming the host of America’s Funniest Home Videos, and the two programs cemented Saget’s status as TV star.

Bob is best known for his role of Danny Tanner on the ABC sitcom Full House and for being the host of America’s Funniest Videos. Bob is also known for his stand-up routine. He is also the voice behind the future Ted Mosby on the CBS sitcom How I Met Your Mother.

Saget also made a hilarious guest appearance on the HBO comedy series Entourage, portraying himself as a dope-smoking divorced man with a fondness for prostitutes.

Saget then went on to write, produce, and provide some of the voices for the nature documentary spoof Farce of the Penguins (2006). For the HBO cable network, Saget created his own stand-up special Bob Saget: That Ain’t Right in 2007. Also around this time, he made his Broadway debut in The Drowsy Chaperone.

In 2009, Saget returned to television with the family sitcom Surviving Suburbia. He played a husband and father of two on the series.

He previously was married to attorney Sherri Kramer in 1983. The couple had dated since high school. They became parents of three daughters, Jennifer, Aubrey and Lara Saget. The couple divorced in 1997. 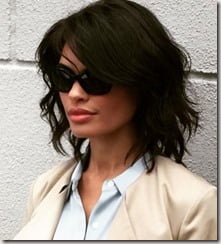 Though the couple seamed like an odd match, it appeared as if they were having a good time together.

Christin Kalaskie met Bob at a comedy club in Denver. She moved to L.A. after she signed with prestigious modeling agency Ford.

Kalaskie previously worked as a Director of Client Partnerships and as a Producer/ Art director at Moxie Sozo. She holds a BA, International Relations, Psychology from Claremont McKenna College and has also worked as a VP of Marketing and Director of Development her LinkedIn says.