The word in the streets is that Scott Disick and long time girlfriend and baby mama Kourtney Kardashian have called it quits!

Media outlets say the Kardashian mom of three, had it and sent Scott packing all due to some images that show the 32-year-old getting cozy with Chloe Bartoli. 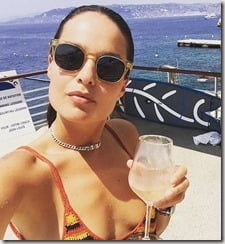 Chloé andher twin sister Marielou Bartoli are known stylists and designers. They were born and raised Angelenos, in Laurel Canyon to be exact. They speak French given that they have Parisian parents.

25-year-old Bartoli and Scott were recntly snapped while living it up in the South of France with a group of friends.

Major outlets say Kourtney had enough after seeing the photos, now if you ask why would she finally end their rocky relationship? This might help you understand; according to Us Weekly, the pair (Bartoli-Disick) also used to date – before he got serious with long term partner Kourtney.

As for Bartoli’s love life, she’s been said to have been in a prior relationship with Jared Leto –for whom she styled for a couple years and the two ended up dating, according to Perez Hilton.