Chasen Nick is one among the men casted in season 16 of The Bachelorette, originally starring Clare Crawley who has now been replaced by Tayshia Adams.

Chasen hails from sunny California, the 31-year-old is originally from San Diego where he used to be a swimmer. He has a younger sister and his father’s name is Lyle Nick.

He lists his day job as an IT account executive, according to LinkedIn, Chasen has worked for the staffing firm Apex Systems for the last eight years. He started as a recruiter and gradually made his way up to an account executive role.
He was previously a Territory Sales Representative at CBeyond from 2011 until 2012 -where he was in charge of direct Sales of Telecommunications through pointed interaction with small business owners through face to face cold calling and networking.
He was also a swim coach at Club Sport Valley Vista for over 4 years. 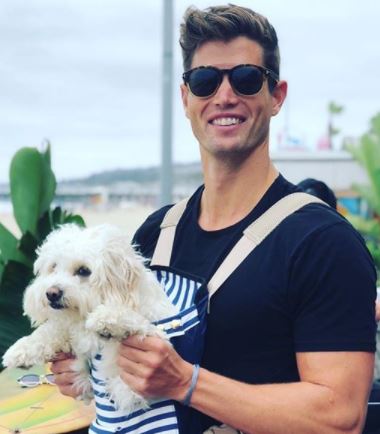 But that’s not all, Nick is apparently also pursuing a career as a model and with his looks, let’s just say is the right thing to do.
He recently signed with modeling agency No Ties and shared his first Top Gun-esque photoshoot earlier this year.
His Bachelorette bio says that he one day hopes to adopt a goldendoodle puppy. A quick glance through his social media and is safe to say he is definitely a dog lover.
In addition to dog content, you can also appreciate his modeling shoots and sweet family snaps, are all on Chasen’s Instagram.
He shared a photo of his younger sister, Alyssa Nick Bernacil on her wedding day and captioned the image
I couldn’t be happier or contain my excitement for my little sister to marry the man of her dreams.

Chasen also describes himself on social media a ‘Fitness ⁣⁣Enthusiast’ -and is quite clear after checking out his body.
Thoughs on Chasen? Will he make it far?