Real Housewives Tamra Judge and ex-husband Simon Barney have been under the microscope over the past years with their biter end, following a much more bitter divorce battle. For Tamra the future looks bright as she denies rumors of her being kicked out of the show, about the show getting cancelled and even twitting that she is NOT getting a divorce from new hubby; and Simon’s horizons are not looking bad either, let get to know his alleged gal pal better!

While some applaud Simon for exiting the show, that does not mean he has stopped being a topic for media. The father of three has gotten even more attention as his custody battle with ex-wife and Real Housewives of Orange County star Tamra Judge unfolds.

Barney has claimed that Judge is an unfit mother and is fighting for full custody of their three children; Sidney, Spencer and Sophia.

Catushia is already making her own headlines, as she was involved in a major drama act between her and Tamra. During custody hearing the broads yelled at each other after Tamra’s man Eddie pretended to take out his phone to film Simon and Catushia Ienni. Tamra asked, “How do you like it?”

Interesting rumors have been surrounding the pretty gal, not only is Simon’s girlfriend allegedly already married, an insider EXCLUSIVELY told The ***** more details of the couple’s strange relationship. “Catushia is 20 years younger than Simon and is known to hook up with older men,” the insider alleges. “He met her at a bar one night when she was drinking all alone. She moved in with Simon four years ago and does not work.

Simon controls her, tells her what to wear and even when she can leave the house.” “She’s very strange to talk to and Simon doesn’t take her in public often, he even leaves her at home when he travels. And she weirdly looks a lot like Simon’s oldest daughter,” the source adds. “She is obsessed with reality TV and wants what Tamra has,” the insider claims. “She has been accused of talking badly about Tamra to the children in hopes that the kids will call her mommy one day.” 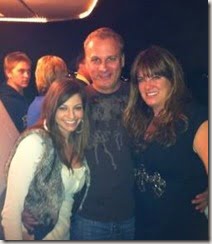 According to a LinkedIn found under the same uncommon name, Ienni is a Business Banker at Wells Fargo Bank and has been for the past four years. The financial services rep currently resides in Aliso Viejo, California.

Reports say Catushia did not stay quiet and shouted back at Tamra –who says Ienni secretly taped her at her daughter’s first day of school without her consent (presumably to demonstrate that she’s an unfit mother) –Catushia shouted “I didn’t take video of you!” I don’t need a picture of your ugly f–king face!”